The Night of San Juan

The origin of this custom is associated with celebrations in which the arrival of the summer solstice was celebrated, on June 21 in the northern hemisphere, whose main rite is to light a bonfire. The purpose of this ritual was to "give more strength to the sun", which from those days was becoming more "weak" -the days are getting shorter until the winter solstice. Symbolically, fire also has a "purifying" function in the people who contemplated it.

The Night of San Juan is a Christian festival of pagan origin in which bonfires are lit and fireworks and firecrackers are thrown. Although it is celebrated on the night of June 23 to 24, it is associated with the summer solstice (June 21) and the pagan rites that, with the bonfires, sought to increase the strength of the sun on its way to the winter solstice. The fire, in turn, fulfilled a purifying function in the people who contemplated it.

Today we talk about San Juan’s verbena rather than Noche de San Juan because the main character is the party. There is no festival, many are held in public or private places, in private homes, in the streets and on the beaches of Barcelona. Days before June 23, the first firecrackers are heard: they are mostly children and young people who can not wait until the night of the 23rd. And it is that in the San Juan festivities the Barcelonians buy their firecrackers and fireworks, and throw them throughout the night.

The bonfires are built by neighbors or entities of neighborhoods that seek or provide old furniture to burn. You will find bonfires in many squares of the city and on the beaches, and if you dare to buy firecrackers or fireworks you will find stalls in many places in Barcelona. 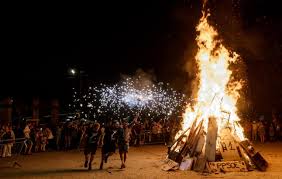