On this day the city is full of books, roses and yellow stripes: it is the tribute to culture and love and many positions are specialized in Catalan books, because Sant Jordi is also considered a day of promotion and defense of culture and the Catalan language.

On April 23, one of the most important festivals in Barcelona is celebrated: the Sant Jordi Day, the day of lovers and love and a festivity that over the years has acquired a vindictive tone of Catalan culture.

On this day the city is full of books, roses and yellow stripes: it is the tribute to culture and love and many stands are specialised in Catalan books, because Sant Jordi is also considered a day of promotion and defence of culture and the Catalan language.

The festival of Sant Jordi is celebrated throughout the country on April 23, the day on which the knight Jordi died. The saint, who was under the orders of Emperor Diocletian, refused to follow the order to persecute Christians, so he was martyred and beheaded. Very soon they began to venerate him as a martyr and immediately appeared fantastic stories linked to his figure.

The cult of Sant Jordi was fully extended to all the Catalan Countries, during the Middle Ages, although in the 8th century this devotion already existed. And since 1456 it is the official patron of Catalonia.

The legend of Sant Jordi. The legendary Catalan explains that in the village of Montblanc there was a terrible dragon that caused havoc between men and beasts. To contain it, they chose by lot to an inhabitant and they gave it to the monster so that it devoured it. One day, it was the turn of the king’s daughter, who would have died at the hands of the beast if the knight Jordi had not appeared to confront the dragon and kill him. Tradition adds that with the spilled blood of the beast a rosebush of red flowers was born.

This story has withstood the test of time to this day, and the men of Catalonia each year give roses to their ladies, in spirit to Sant Jordi and the women give a book to their partners.

This “Day of Love” is also the anniversary of the deaths of William Shakespeare and Miguel de Cervantes, one of the most renowned Spanish writers. In 1923, it became a tradition for women to return the favor of the rose and give to their beloved books. In 1995, UNESCO declared April 23 as the “World Book Day”, giving even more prestige to this special occasion. 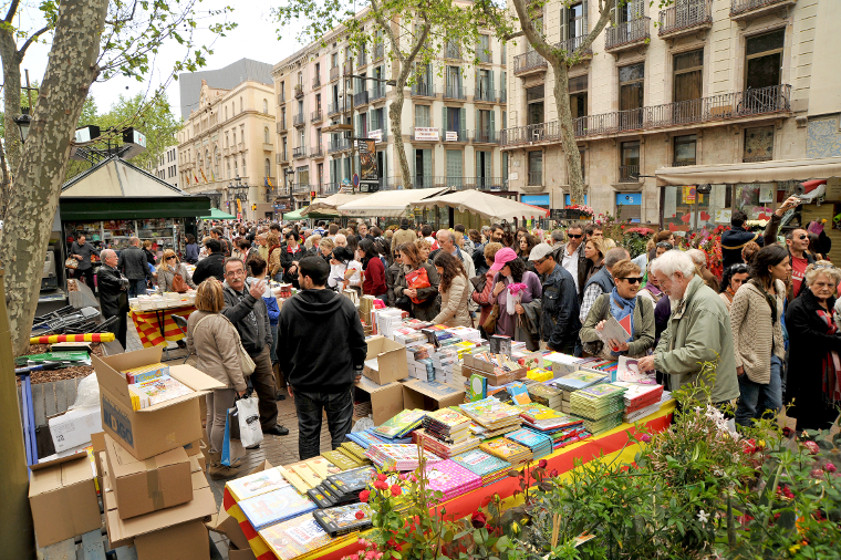